Petrol stations too will be allowed to operate from 6am to 12am too.

What are your thoughts on this announcement? Let us know in the comment section below!

8
How to Install Newswav
1. Scan the QR code below
1. Tap this button 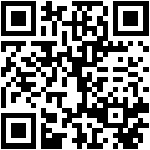